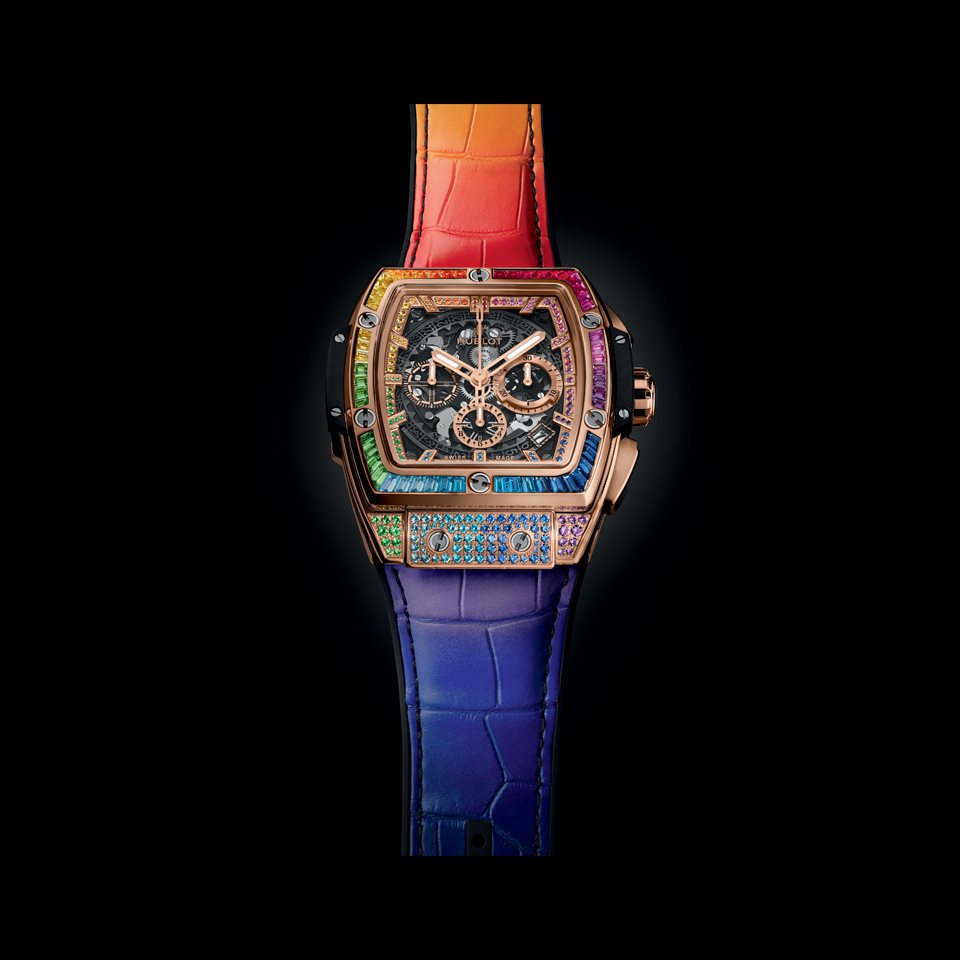 A celestial or divine manifestation that called for reverence or hope depending on the civilisation, this bridge between the earth and the sky was deconstructed by Isaac Newton in his theory on light and colours. These days, however, the rainbow remains a symbol of peace, joy and optimism. Like a modern alchemist, the master of the Art of Fusion, Hublot has rendered this fleeting optical phenomenon immutable by designing the Spirit of Big Bang Rainbow, two 39-mm and 42-mm timepieces, thus enshrouding the beginning of 2020 with good omens. Like a rainbow of gemstones, they make this colour spectrum sparkle, prolonging its hitherto ephemeral appearance.

After the Big Bang, it’s now the Spirit of Big Bang’s turn to take on the colours of the Rainbow! The soft shade of the cases in King Gold takes on the colours of the rainbow with a shimmering paving of round and baguette-cut gemstones. On the 42-mm Spirit of Big Bang Rainbow, the hour hand clasps the chronograph skeleton movement like the claws of a precious setting, while sapphires, rubies, topazes, tsavorites and amethysts entirely cover the dial of the 39-mm model with sparkling reflections.

The seven famous colours indefinitely extend their power by also covering the alligator straps. These two newcomers reignite the success of the Spirit of Big Bang collection whose design is directly inspired by the Big Bang with a barrel shape. This is a unique case construction that enables an infinite number of combinations of materials and colours and encloses the Hublot HUB4700 movement, considered by connoisseurs as one of the best Swiss chronographs ever made.

THE AUDACITY OF EXCELLENCE THE LADY-DATEJUST

Admirers Guide to Buying a Breitling